skip to main | skip to sidebar

Fact: Beginning in September 2010, Ontario boards of education will start to offer full-day junior and senior kindergarten in some schools. The boards will also be responsible for providing before- and after-school childcare to the children in full-day kindergarten where there is sufficient demand. This month the Ontario Ministry of Education announced the names of 579 schools that will offer the Early Learning Program (ELP) in the 2010-11 school year.

Implications for childcare operators providing care to four- and five-year-olds
If the school in your centre's catchment area is chosen for full-day kindergarten and before- and after-school childcare for the children in full-day kindergarten, your centre may lose most or all of its four- and five-year-olds. It is important to understand the financial consequences of losing this program and to analyze them soon so that you and your board of directors can plan accordingly.

A method of analysis
You may find the sample calculation shown below to be useful for analyzing the financial impact of shutting down all or part of your program for four- and five-year-olds.

Most childcare programs licensed under the Day Nurseries Act of Ontario offer programs by age group (infants, toddlers, pre-school children and school-aged children). Furthermore, childcare is most often provided to each age group in a separate physical space or room. Each playroom has direct costs of care based on:

A childcare centre also has costs (which are often called overhead costs) that are not associated with any one room. These costs include, among others, insurance, utilities and non-program staff, such as an off-program supervisor and a cook.

A centre's revenue comes mainly from parents' fees and subsidies, both of which are directly related to the number of children it has enrolled. Centre revenue not directly associated with enrolment includes fundraising, GST rebates and interest. This revenue is usually minor in relation to all costs.

If your childcare centre is to remain viable, it must generate enough revenue from each playroom to cover both the direct costs of care in that room and a portion of total overhead costs. If you close your program for four- and five-year-olds, determine how much additional revenue must be generated to cover overhead costs, or how much overhead costs must be reduced to balance the budget.

As a first step, the following method of calculation can be used to determine the contribution a playroom makes to your centre's overhead costs. The example has been simplified to focus on the main elements of revenue and expenses: 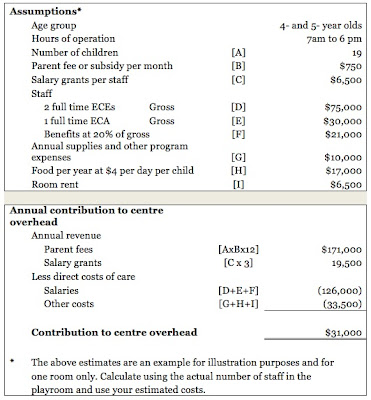 In the above example, the playroom contributes $31,000 towards the centre's overhead. If the room is closed, the centre must either trim $31,000 from its overhead or find additional sources of revenue. In a stand-alone centre, the only way to earn considerable additional revenue is to raise your fees. I will discuss some of the difficulties of raising fees in another posting.
For a more detailed discussion of budgeting childcare revenue and expenses in Ontario, please refer to:

Stay tuned for the next posting on February 3. I will look at how the Ministry of Education has advised boards of education to calculate the fees to be charged to parents of kindergarten children for before- and after-school childcare.
Posted by Phil Cowperthwaite-Sue Hunter at 7:12 PM

Phil Cowperthwaite-Sue Hunter
Toronto, Ontario, Canada
Phil Cowperthwaite is a Chartered Accountant specializing in providing audit services and financial management and advice to not-for-profit childcare centres and children's mental-health organizations in the Greater Toronto Area. Sue Hunter is a consultant working with not-for-profit organizations and government. Her focus is children and families and the staff who work with them. Sue specializes in supporting organizations to connect effectively with their communities and to respond effectively to change.